Before going bust, the Swedish car manufacturer Saab built cars that were stereotypically driven by architects and college professors. The cars were always a bit quirky and different, which is probably one of the reasons why the company went bust. Saab didn’t start by building cars, however. Its eponymous parent company started by building aircraft for the Swedish military and it is still going strong. The Saab J 35 “Draken” (Dragon), built by Stefan Johansson, first flew in 1955 and was one of Europe’s first supersonic fighter aircraft. 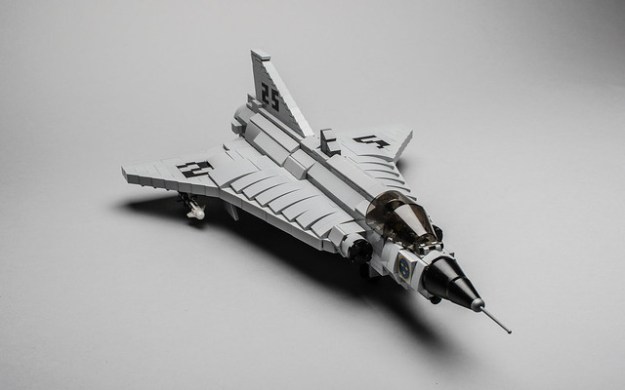 Stefan’s model clearly shows the very distinctive cranked delta wing of this Cold War classic. The Swedish military typically required their aircraft to be suitable for operations from poorly prepared surfaces, in terrible weather and to be maintained by conscripts with relatively little specialised training. The resulting aircraft always looked rather different from their contemporaries. This also applies to the Draken’s replacement in Swedish service: the Saab JA-37 “Viggen” (Thunderbolt). If anything, Stefan’s model of this jet is even more impressive. 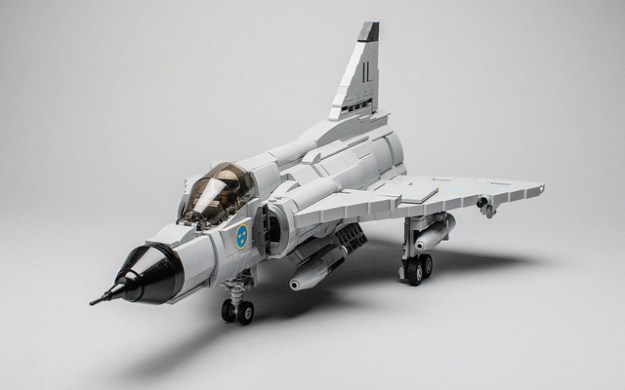 It has a large double delta wing, canard foreplanes and an unusual undercarriage with double main wheels in tandem, designed to facilitate operating from unpaved runways. Another quirky feature is that, in order for the jet to fit inside small underground hangars, its vertical tailfin can be folded down. Judging from the row of hinges this can also be done on the model. The complicated curvy shapes of fuselage are recreated very effectively using various slopes, and while I am normally not a fan of studless builds, the choice to build the model’s wings using bricks on their side works really well. Saabs are unusual fighters and an unusual choice of subject for LEGO models, but these are just more reasons to like them.

Product Description
p.(27) To protect the rights and freedoms of mini-figures the world over, you can now build a sophisticated anti-aircraft tank for the best protection. The tank includes two 50mm surface to air cannons and a third 50mm cannon to protect from ground attacks. An adjustable roof gives you access to a command and control center with surveillance and intelligence capabilities. LEGO bricks are a great way to stimulate the creative skills in any child or adult.