I just finished reading Peter Heather’s excellent The Fall of the Roman Empire: A New History of Rome and the Barbarians.

After my visit to Room 49 in the British Museum a couple summers ago, I wrote in my Moleskine “Post-Roman Britain=Post-Apoc.”

So, does this diorama by Harry Russell (Karrde) featuring an Anglo-Saxon pit-house fall under ApocaLEGO? Nah. But I’ll use any excuse to blog an archaeologically inclined LEGO model.

(Hat-tip to Legobloggen for helping me to catch up after a busy, busy month.)

I’m not much of a trainhead, but I can certainly appreciate the functionality Elroy has built into his tiny puzzle, as well as the black bricks bordering the tan base.

The construction and presentation of this hornet battle bug arrangement by Lino Martins called Protector of the Great Queen is pretty fearsome. Lino keeps rewarding the viewer with fun techniques hidden in the foliage like Jar Jar heads as the base of a plant. As shown at this year’s Brickworld, Bob Carney’s Neuschwanstein does not disappoint. This castle is massive and simply gorgeous. It really captures the grandeur that King Ludwig was going for, though I’m certain without the whole “bankrupt my country” thing. Bad idea, that. 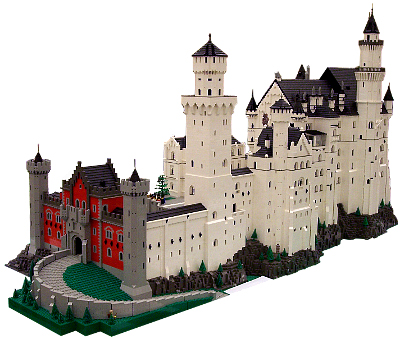 Anyway, fantastic castle. Mr. Carney has plenty of work-in-progress pictures on his site, as well as some photos of the real castle and a bit of history. Check it out!

Now this is what I’m talking about. MOCpages user Jonas James writes this:

This design incorporates the use of light and dark contrasting to emphasize form and conceals roof structures with a decorative crowning parapet.

To commemorate the passing in April of Nate “nnenn” Nielson, each of the three LEGO conventions over the summer and fall are hosting Vic Viper fly-ins. Keith Goldman gives us a glimpse into the Chicago fly-in earlier this month.

Two weeks ago in Chicago, I had the pleasure of organizing the first Vic Viper fly-in, in honor of our departed friend and fellow builder Nate “nnenn” Nielson.

72 Vipers from 66 builders joined the missing-man formation from a total of 7 countries: Australia, Bermuda, Canada, Germany, Italy, the Netherlands, U.K. and the USA. We kept the center of the layout open in the tradition of missing man formations, with nnenn’s rubber-band holder avatar as a placeholder. The public was drawn in by the amazing Vipers, and more often than not stayed for the story behind it.

Thanks again to all the participants that made the formation an outstanding tribute to Nate. Special thanks to Ley Ward for his time and patience, and skill with the dozen or so Vipers that arrived with “some assembly required”. For a detailed list of participants, please follow the link to my Flickr-posting and check the notes.

The formation was a moving experience for many of the builders involved, and we’d all like to express our condolences again to the Nielson family. Nnenn was missed in Chicago and will clearly be missed around the planet.

Both of the upcoming LEGO conventions, BrickFair in August and BrickCon in October, will also be hosting missing man formations to honor Nate. If you would like to participate in either of these formations, you can contact Dan Rubin (for BrickFair) and Andrew Becraft (for BrickCon).

Just in time for Independence Day here in the United States, 21006 White House

has been added to the LEGO Shop’s Architecture line.

Designer Adam Reed Tucker also has an exhibition at the National Building Museum in Washington, DC from July 3, 2010 through September 5, 2011.

Last month’s challenge over at Lugnuts has, as always, yielded some amazing builds. Peter Blackert’s Austin FX4 London Black Cab caught my eye in particular. I’ll be right honest — I thought it was a hearse. Seeing it’s something different doesn’t phase me in the least, though. I won’t deny the sleek styling and fantastic lines! For some more rural inspiration, check out this bridge and landscaping: We never blogged the first version of Zackhariah Macasaet’s motorized M1A2 Abrams Tank, so it’s a good thing he posted a better version. This is one sturdy war machine that can handle a variety of obstacles including crossing large gaps, climbing a mound of nails, and even stand from being dropped! Watch the video and see it in action.